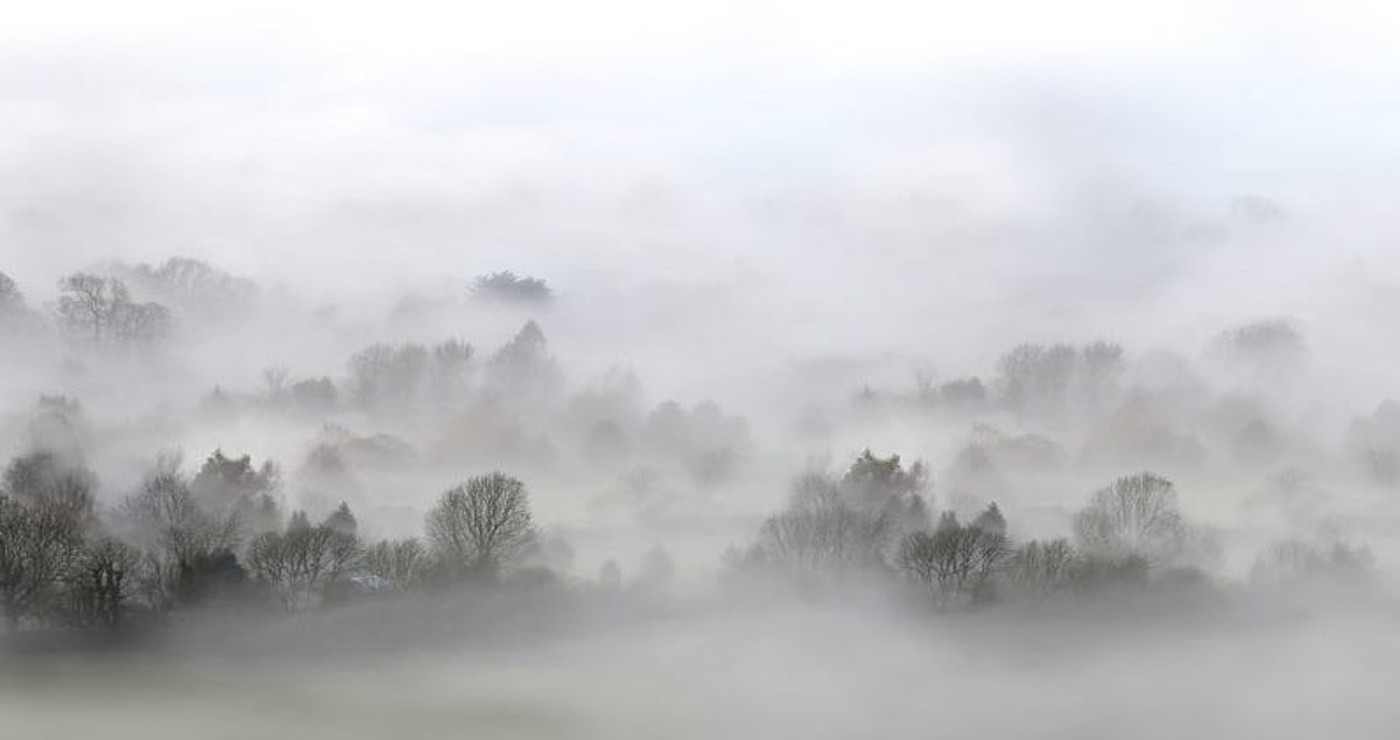 The Earth is 70 percent water, but almost all of that liquid is seawater us humans can’t drink. Already, California is besieged by drought, while citizens in South Africa’s Cape Town try to push back Day Zero, the day the city runs out of water. As our population grows and temperatures rise, the global water crisis worsens, spurring scientists to develop better ways of harvesting water.

Around the world, people living on coasts collect water by harvesting the fog. “Fog is a cloud very low on the ground,” explains Jonathan Boreyko, an engineer at Virginia Polytechnic Institute and State University who studies nature-inspired fluids. Fog harvesters are mesh nets, usually one meter squared, erected perpendicular to the path of the wind. As the wind blows fog through the device, the mesh catches the droplets, and gravity pulls the water down into containers underneath. Most of the time, fog harvesters collect about three liters a day per square meter of mesh.

The beauty of fog harvesters, explains Boreyko, is that they take very little effort. The harvesters can be used in remote areas and don’t need constant supervision; just set it up, and collect water at the end of the day.

But they’re not very efficient, in part because the mesh holes have to be just the right size. If they’re too large, the droplets will escape through it. “But if you make them too small, the water is going to get clogged within a matter of seconds because of surface tension, and so it won’t slide down and won’t be easily collected,” Boreyko says. It’s hardly reasonable to have someone wringing the clogged mesh constantly.

So Boreyko worked with Virginia Tech industrial designer Brook Kennedy to create a more efficient harvester that they call a “fog harp.” (Their research was recently published in ACS Applied Materials and Interfaces.) Kennedy had spent time in northern California, where the giant redwoods get almost a third of their water from the rolling fog that comes in from the Pacific. “Their needles aren’t shaped like volleyball nets or screen door mesh,” says Kennedy. “They’re linear, and that was the little bit of insight that connected with what Jonathan had been working on.” Inspired by the trees, Kennedy and Boreyko’s “fog harp” only has vertical wires.

The fix — taking away the horizontal wires — seems deceptively simple. Yet tests using a humidifier showed that there was no way for the harp to clog because droplets simply slid down the wires. Instead of collecting three liters of water for every square meter of material, they increased it to nine liters.

Next, the team hopes to do field tests outdoors and collaborate with manufacturers to cheaply produce fog harps on a mass scale. Already, says Boreyko, the two have heard from people in Bangaldesh, vineyard owners in Mexico, and investment firms in South Africa trying to solve the Day Zero crisis. For them, water is a humanitarian issue. According to the World Health Organization, half of the world will be living in areas where water isn’t easily available by 2025, while other reports show that global water shortages pose a threat to the national security.

The fog harp is a low-tech improvement on the traditional fog harvester, which only collects about 1 to 3 percent of the fog passing by. In a paper published today in Science Advances, a team from the Massachusetts Institute of Technology created a higher-effort, and higher-tech, fix. When air approaches an obstacle (like mesh wires), it tries to go around it. Now, when that air includes droplets of water, the water also tries to go around, meaning that a lot of the water is lost. MIT engineer Maher Damak discovered that manipulating the electrical forces around the fog could solve this problem, making the harvester much more efficient.

Here’s how it would work: You have the mesh fog harvester. Just a few inches away is a vertical structure of roughly the same area, with electrodes on it. (The electrodes would need to be attached to a power source, though Damak says it takes very little energy.) The electrodes zap the air, electrically charging the droplets of water and making them move toward, instead of around or away from, the wires. Essentially, the electrodes make the fog droplets attracted to the mesh, according to Damak, leading to almost 100 percent efficiency.

This method inspired Damak to start a water-harvesting startup called Infinite Cooling with fellow MIT engineer Karim Khalil. They want to take this same idea and apply it to power plants, which Khalil says are one of the biggest users of water in the country. Most of the water is used to cool the plant down; in cooling towers, water is boiled into giant clouds of fog called cooling plumes. Khalil and Damak want to place fog harvesters near cooling plumes to collect and reuse water that would otherwise be lost.

Now, Khalil and Damak are building a pilot version of their fog collector that will be installed near MIT’s Central Utility Plant by the end of the year. There’s plenty of longer-term potential too, says Damak. Because the water that the towers used is purified and distilled, it’s possible that one day this method can be used with sea water to strip out the salt, and then used in nearby communities.

Arid regions need water, but fog harvesters work best in humid areas. So, a team at UC Berkeley has developed a method of collecting water from the desert using only sunlight. A few years ago, scientists reported on the unique properties of a material called a metal-organic framework (MOF). MOFs absorb liquids very easily, even in dry conditions, but then release these liquids when there’s sunlight. In 2014, this was just an idea, but in a paper published today in Science Advances, scientists tested their water-gathering device in Scottsdale, Arizona, where the humidity can be as low as 8 percent.

The device is essentially a box inside a box, says study co-author Omar Yaghi, the UC Berkeley chemist who developed MOFs. The inside has a few kilograms of MOFs, while the outside box is transparent plastic.

The device is small, and collected about one-third of a cup of water per pound of MOF. MOFs, unfortunately, are very expensive, but Yaghi and his team are creating a cheaper version with aluminum instead of zirconium. He’s also considering making a more active version; if you include a fan that pushes air through, it’s possible that you could collect a lot more water. And next, they plan to test the device in one of the hottest, driest places in the US: California’s Death Valley.