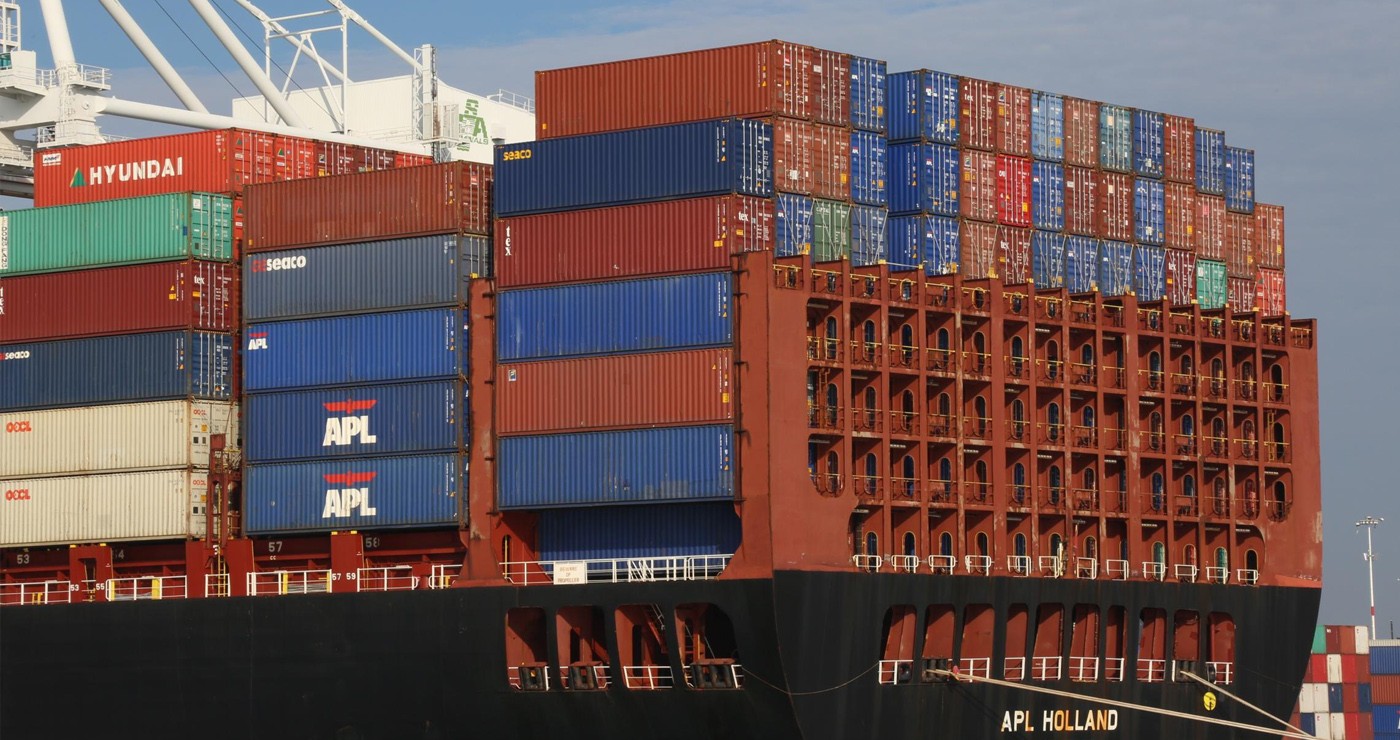 Whatever the bleating from the White House about trade, this is a story that we’re all entangled in every time we buy a toaster at Target or a t-shirt at TopShop. That’s because almost no matter where you live and how you shop, the vast majority of everything you buy came over to the United States in a shipping container. Or at least its components did.

And yet when you think about it, this is a remarkable system. It’s analogous to Internet Protocol, where each packet of data can move anywhere within a standardized system, but you’re dealing with actual frigging stuff, apples and raw hides and hair barrettes and hospital beds and transmissions for cars.

So, each piece of this system had to be created, had to be refined, had to be standardized: The box, the crane, the ship, the operations of the yard, the locking mechanisms that allow the boxes to be moved from ship to truck chassis to rail car. And each component has to work with all the others all over the world. Because it’s this whole system that is containerization. It’s not just the box. (Though if you want to read the best book about containerization, it is called The Box. The author is Marc Levinson, who is in this first episode.) And what it allowed was a massive decline in the price of shipping and thereby a massive expansion of global trade.

I wanted to know, “How did containerization happen?” And it turns out, the particulars are fascinating. I traced the history back to one spot in the Port of Oakland’s Outer Harbor—that’s the part closest to the Bay Bridge, if you’ve ever driven from San Francisco to the East Bay. Right there, three smallish gray shipping cranes are still standing.

You know what the descendents of these things look like: dinosaur-y, with legs nestled into rails and a piece dangling from the center (that’s the spreader: it’s what locks onto the shipping containers). In Oakland, these are the symbol of the city. But everywhere there are container ports, people are fascinated by these machines. They’re just so huge, aesthetically parked in between futuristic and prehistoric.

The three gray cranes were the first to load ships with containers to send across the Pacific. But to where, you might ask?

The answer is Cam Ranh Bay.

The Vietnam War was a key enabling factor in the development of containerization. The first containers headed across the Pacific were filled with military supplies for troops involved in the escalation of the war. The military contract was the corporate springboard for Sealand, the first container shipping company. At one point, the container expert Marc Levinson told me, Vietnam-related cargo represented something like half of Sealand’s business at a crucial time in the company’s growth. Yet few stories of Sealand’s rise mention the war connection.

In the first episode, we meet Gabby Miller, a young artist who is keenly aware of container shipping’s history. Her Vietnamese mom and American dad met doing humanitarian aid work in Vietnam and she grew up just a few miles from the Port of Oakland.

So come with me and Gabby and explore the rise and repercussions of containerization, everything from the destruction of Manhattan and Brooklyn’s working class neighborhoods (you’re welcome, Red Hook hipsters) to the experience of crossing the ocean on a skyscraper-sized machine crewed by two-dozen people.

One strange thing that didn’t make it into the episode, but that is incontrovertibly awesome, is that there are basketball courts deep inside some of the ships. And the mostly Filipino workers mostly love basketball. So they play down there! Gabby Miller shot some video of the guys getting some run amid coils of rope thicker than their arms. It’s a parting gift.