The Race to Save Arctic Cities 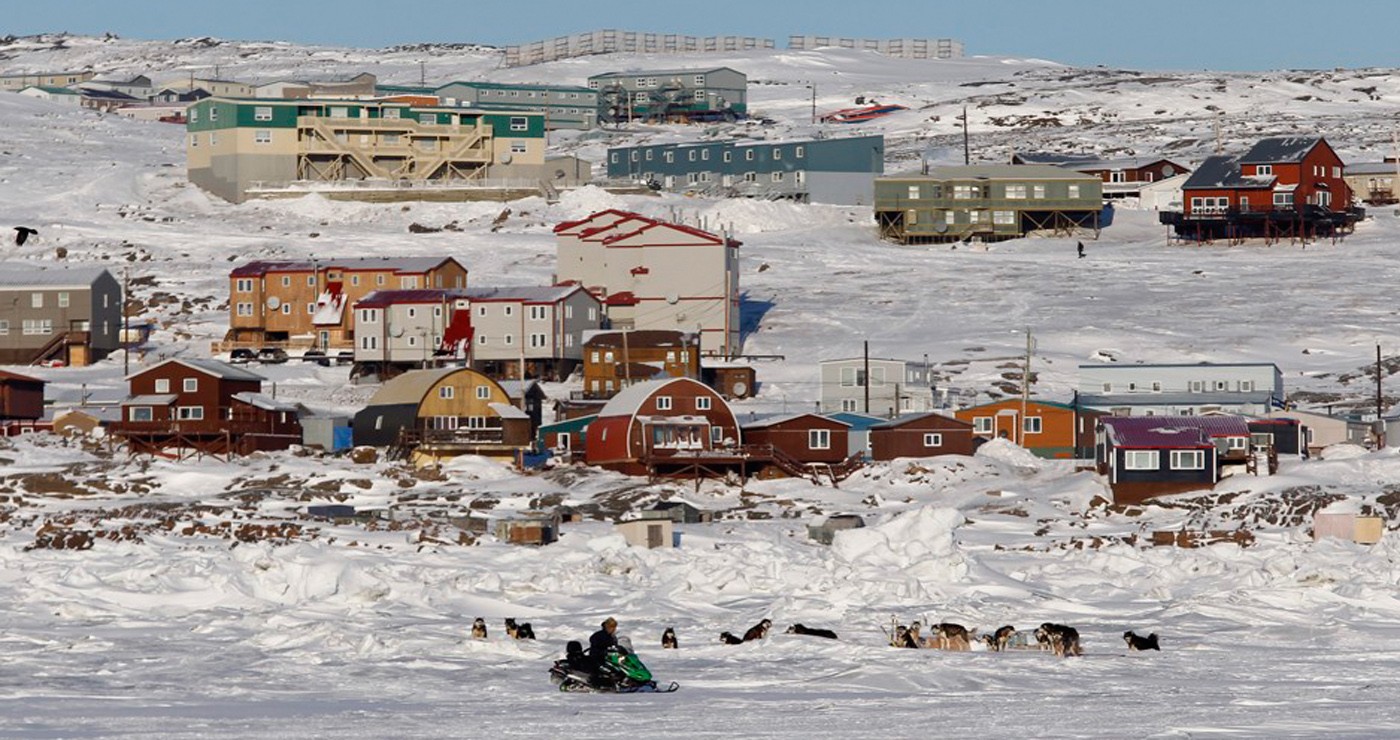 In Russia, buildings are sagging and crumbling. In Greenland, a wildfire broke out last year. And in Alaska, entire villages may be relocated because the land upon which they’re built is no long trustworthy.  All across the North, the very ground is changing, and the buildings and roads built upon the thawing permafrost are shifting and cracking.  In Iqaluit, the capital of the Canadian territory Nunavut, a good home is hard to find. An efficiency apartment runs around $2,000 a month, while a two-bedroom house will cost about $3,500. These New York prices are shocking in a small, remote town of about 7,500 people. And there still aren’t enough homes for everyone.  Iqaluit expanded rapidly when Nunavut became an official Canadian territory in 1999.* Canada’s largest territory is home to many Inuit communities; about 90 percent of the province’s residents are indigenous. The government is a major employer in Iqaluit, alongside more traditional activities like fishing, hunting, and carving. Iqaluit’s new status as a capital brought a surge of new public-sector workers—along with an accompanying rise in construction of government buildings and houses.  Many residents have their housing subsidized either by their employer or by the government, if they are low-income. So prices are unlikely to come down.At the same time, Iqaluit—like its circumpolar neighbors—faces a housing crisis of a different sort. The houses are sinking into the warming earth.

Homeless in the Arctic

The only men’s homeless shelter in Iqaluit is perpetually overcrowded. Men share rooms with several bunk beds pressed close together.  When I met him in late 2016, Charlie Papatsie had been living at the shelter for about two years. He had lost his last home when he was fired from his job, which had provided housing. He was fired, Papatsie said, because of a drinking problem. After that, he found himself on the icy streets of Iqaluit.  Papatsie was trying to pull his life together. He was working at a construction company as a warehouse manager, and still trying to get government-assisted housing.  “I’m on the list,” he said. But he had no idea when he might have his own home again. “I’ve been on the list going on five years now,” he added, shaking his head.  Housing in Iqaluit has been tough to find for years. And climate change is making everything more complicated, destabilizing the housing market across the Arctic.  “Housing, as you’ve probably seen, is extremely expensive out here. People can barely afford a home,” said Colleen Healey, the climate change program manager for the government of Nunavut, when I interviewed her around the same time as Papatsie. “Well, it’s even worse if your home has a half-life now—because the permafrost under your house is thawing.”  Temperatures in the Arctic continue to soar at double the rate of the rest of the world. At the same time, precipitation patterns are also changing all over the planet; in the Arctic, that means more erratic snowfall. These changes are affecting the very basis of the Arctic: the land.It’s difficult to build new houses on thawing permafrost, and many existing houses have huge cracks in the foundations. It is also extremely expensive to ship materials in the Arctic, so the houses that are repaired and built must be planned very carefully.“In my lifetime, it’s a totally different Arctic,” Healey said. “It’s a totally different Nunavut.”

Permafrost is any stretch of ground—including soil and bedrock—that remains frozen for two years or more. The top layer, the “active layer,” freezes and thaws with the seasons, but the layer beneath stays at 0 degrees Celsius for multiple years.  Or it’s supposed to, anyway. As temperatures soar and snow blankets the earth in new weather patterns, even permafrost that’s been around for thousands of years is beginning to give way. The landscape of the Arctic is changing more than it has since the end of the last Ice Age.  Permafrost reflects everything that’s happening on top, explained Dmitry Streletskiy, an assistant professor of geography at George Washington University: “Warmer temperatures will result in permafrost thaw.”  Permafrost thaw is not a new problem; urban planners, architects, and builders have taken its volatility into account for decades in the Arctic. But climate change exacerbates existing permafrost issues—and it does so rapidly.The main problem has to do with soil moisture. When water freezes, it expands, so the ground rises; conversely, when it thaws and the soil contracts, the ground sinks. Permafrost in many places across the Arctic is now locked in a pattern of thawing and refreezing each new season, when once it remained steady. The ground rises and sinks with each change in the weather.Across the Arctic, roads and buildings buckle along with the ground. Russia is home to some of the largest cities in the Arctic, which are undergoing profound changes because of permafrost thaw. In the coal-mining town of Vorkuta, about 40 percent of buildings have become deformed from changes in the ground. In Norilsk, the largest city built on permafrost, about 60 percent of buildings have been damaged by permafrost thaw, and 10 percent of the houses in the city have been abandoned. Most of the changes happen gradually, but they can render buildings dangerous once they begin; a few years ago in Norilsk, a cement slab broke a doctor’s legs when a building shifted and crumbled.

Other circumpolar regions face infrastructure challenges from the warming earth. In Greenland, wildfires have swept over previously icy tundra, coming dangerously close to towns and research stations. In some places here, finding and storing water can be a problem; water kept in tanks must be thawed to use, and the heated tanks then heat the permafrost.  In Alaska, many towns are running out of places to bury their dead; erstwhile cemeteries have become marshy swamps. And some towns are running out of solid ground entirely. Newtok recently received federal funding to begin relocating the entire town to safer ground. Other towns like Shishmaref and Kivalina may also move in the next few years—or risk disappearing entirely.  Ways to keep the ground cold But there are some relatively simple techniques that officials and urban planners in the Arctic can implement.  Removing accumulated snow from the ground is one easy way to keep the permafrost intact. There’s a reason snow is called a blanket—it actually insulates the earth, keeping it warmer than the outside air. When it’s removed, the ground is exposed to cooler temperatures.  In spring, when that snow begins to melt, preventing it from seeping into the ground is another important part of protecting permafrost. “Water is warm,” Streletskiy noted. “It’s not frozen—so it affects permafrost as well.”  Houses built directly on the ground can also thaw the soil with their escaped heat, so most homes in the Arctic are balanced on wooden or metal pilings driven deep into the permafrost. Other houses rest on screwjacks, adjustable bases that can be cranked up or down as the earth shifts. These stilts also allow air to move over the ground, keeping it cool.  Although pilings and screwjacks are now used extensively in the Arctic, the additional materials and effort to dig into the permafrost makes construction costs even higher.

“The Arctic foundations are considerably more expensive in permafrost areas,” said Streletskiy. “For example, for large residential apartment buildings in Russia, the cost of the foundation can be as high as 30 percent of the structure.”And since pilings and screwjacks both rest on permafrost, they’re imperfect solutions; thawing ground can disrupt even the best foundations.One hospital in Alaska went to extremes to make sure the ground would stay solid. The Yukon-Kuskokwim health facility in Bethel refrigerates the ground with temperature-controlled probes installed in the ground.But this, Streletskiy said, “is not really a sustainable solution” for most Arctic infrastructure. It’s expensive, and it likely wouldn’t be worth it for most buildings and roads in the Arctic.  Instead, a technology called thermosyphon is gaining in popularity. Thermosyphons are narrow tubes that passively pull heat from the ground and ventilate it up into the air—keeping the heat away from the permafrost. They are rather straightforward to install and relatively inexpensive, compared to the alternatives.

“With every problem, first you have to know that there is a problem,” as Streletskiy put it. In the case of permafrost thaw, the first step should be monitoring the ground temperature. This, Streletskiy pointed out, is much cheaper than losing an entire building. Yet many Arctic cities have not yet implemented monitoring, which could lead to expensive long-term problems. Once the damage becomes visible, it’s often too late.  In Nunavut, there are more than 100 boreholes that have measured ground temperatures since 2000. In Iqaluit, Charlie Papatsie’s hometown, officials are taking even bigger steps to monitor the ground—from the air.“We’ve been developing permafrost hazard maps for Nunavut,” said Colleen Healey. The government of Nunavut is working with the Canadian Space Agency to detect changes and shifts in the ground via satellites.“We can actually see movement within 3 millimeters,” Healey said. Once these changes are corroborated by on-the-ground researchers, they develop maps to help planners decide where to build next—and which houses to monitor for potential problems. If homes need to be retrofitted, either the government or the homeowner pays for the work, depending on who owns it. It’s pretty much impossible to get insurance or sell a house once permafrost damage starts to show.Holding up a map of Iqaluit, Healey said, “The blue areas are the most ice-rich. Those are the highest-risk areas. When those big chunks of ice thaw, you can get buildings tilting and changing.” Then she pointed to a strip of brown—bedrock. “That’s the solid rock. That’s not moving anywhere.”  With her index finger, Healey circled a spot on the map. “The city was actually planning on making this whole blue zone the new [development] area,” she said. The idea was to build houses and government buildings there. “And when we did this map, they were like, ‘Okay, let’s not do that. Let’s develop over here on the brown area.’”  Building only on bedrock can create disjointed, sprawling cities, and in larger cities it may introduce transportation problems. But it’s one reliable way to know the ground isn’t going to give way under your feet.  “Iqaluit’s growing,” Healey said. “How can I make sure that the Iqaluit of 40, 50, 100 years from now is better?”